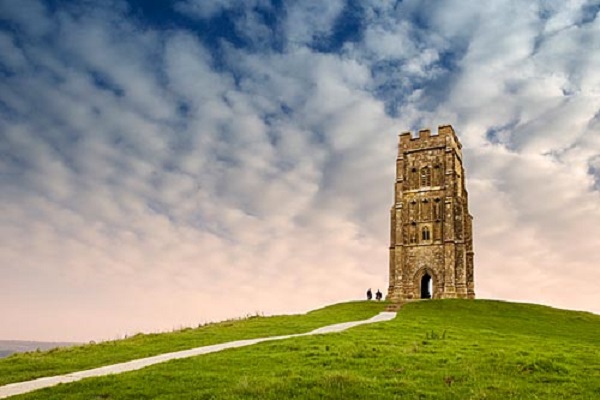 Glastonbury Tor is a conical hill in Glastonbury, England, which is topped by a 14th-century church tower. Rich in legend and mythological associations, Glastonbury Tor may have been a place of ancient ritual and it was certainly a place of pilgrimage for Catholics in medieval times.

Today, it is a popular destination for visiting tourists, Grail theorists, ley-line enthusiasts, and those who make the climb to enjoy its sweeping view of Somerset countryside.

The first monastic Church of St. Michael that stood on Glastonbury Tor was probably destroyed in the major earthquake of 1275. The church was rebuilt in the 14th century, and only the tower still stands today.

As with Glastonbury Abbey, Glastonbury Tor is shrouded in intriguing mystery. Legends concerning its history and sacred significance have circulated since the Middle Ages, many of which center around King Arthur. In modern times, it is said to be a major center of energy and ley-lines and the home of a goddess.

The Isle of Avalon, often identified with Glastonbury, derives its name from a Celtic legend of the demi-god Avalloc or Avallach, ruler of the underworld. In Celtic lore, Avalon was an isle of enchantment. It was considered the meeting place of the dead and the point where they passed to another level of existence. The Tor was believed to be the home of Gwyn ap Nudd, the Lord of the Underworld, and a place where the fairy folk lived.