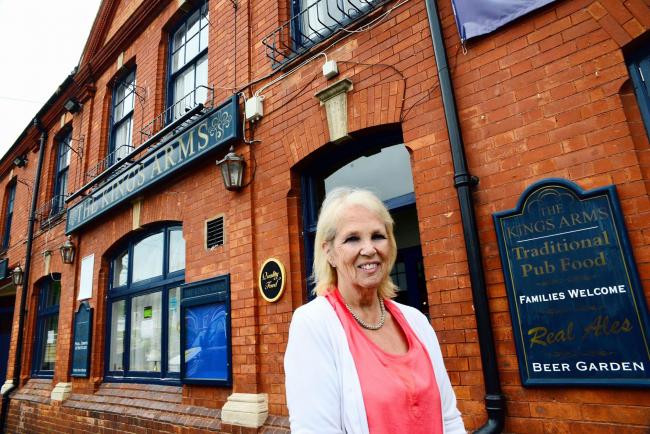 A POPULAR landlady said returning to the Taunton pub she worked in more than ten years ago is like ‘coming home’.

Beverley Higgins, 60, has been working in pubs for more than 34 years and has been the licensee of four pubs in Taunton.

She first started working at The Kings Arms in Taunton in 2007 and became it’s landlady three years later.

The pub was a huge success and Beverley decided to widen her horizons and took on The Bell Inn, in Creech St Michael, and The Black Horse, in Taunton, in 2010.

But in January 2012 Beverley sold The Bell Inn and concentrated on her two Taunton pubs until family tragedy forced her to take a step back.

“My step-dad and mum needed support so I moved them in with me above the King’s Arms,” Beverley said.

“Unfortunately, they passed away within eight weeks of each other and then my father became ill so he moved in with me.

“Sadly, he passed away just two days before Christmas. In the space of five-and-a-half months I lost all three of them and with running two very busy pubs I never had time to grieve or get over their loss. “

Beverley left The Kings Arms in 2016 and continued to work at The Black Horse for a few months but left after her tenancy was not renewed.

But now Beverley has has taken back the reigns at The Kings Arms which she says is a pub that ‘will always be in her heart’.

“I feel like I am coming home, it is so nice to be back in the pub,” Beverley said.

“Since I announced I was coming back to the pub everyone has been so lovely, I have had some people saying ‘thank God you are coming back’, it is just fantastic.”

The pub will be closed until Friday (June 8) when it will officially relaunch with a Soul and Motown disco night and Beverley says she has high hopes for the pub.

“We are freshening up the pub a bit and are bringing back a good pub food menu as people who have come here have missed that,” Beverly said.

“We will have TVs in the pub and outside in the beer garden which will show Sky Sports, BT Sports and Formula One.

“We want to be a traditional, welcoming, loyal pub for the community and we are looking forward to the future.”

The pub will be open from 7pm on June 8 but sadly the kitchen will not be open for three to four weeks.